Re: [Geology2] Major disruption for rail passengers in Yorkshire after tracks are left twisted by colliery landslip

lol...very entertaining. So the type of landflow here that Vic is talking about bubbles up because it slides down and then sort "humps' up later on? Is that the bubbling up? I might have to see the video again...Allison
From: Lin Kerns <linkerns@gmail.com>
To: Geology2 <geology2@yahoogroups.com>
Sent: Wednesday, February 13, 2013 8:56 PM
Subject: Re: [Geology2] Major disruption for rail passengers in Yorkshire after tracks are left twisted by colliery landslip


There's a good explanation as to what Vic describes as "bubbling up," and that's due to the two major types of landflows. Sorry to say, but this amateur video is one of the best out there to explain the difference:

If I was this kid's teacher, I definitely would've given him an "A" just because he tried so hard.


Great pictures...very illuminating. You describe the displacement as bubbling up but to my uneducated eye it looks like it slipped down a small hill. The CA pix were interesting too. Incidentally, we refer to a water fountain here in Wisconsin as a "bubbler". Just a factoid. lol..Allison
From: Victor G Healey <vic.healey@gmail.com>
To: Geology2 Mailing List <geology2@yahoogroups.com>
Sent: Wednesday, February 13, 2013 8:49 AM
Subject: [Geology2] Major disruption for rail passengers in Yorkshire after tracks are left twisted by colliery landslip

What is fascinating is that this land slip appears to have bubbled up from below the railroad tracks in Yorkshire.
Look at how the tracks have been displaced.
They are not sure how to fix the problem.
Here is another picture from CA in USA of how a landslip can leave the surface intact as it moves downward, look at the trees and fencing. 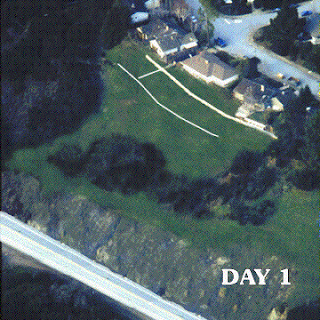 By NICK ENOCH
PUBLISHED: 07:53 EST, 13 February 2013 | UPDATED: 08:56 EST, 13 February 2013
Rail passengers in Yorkshire face long delays today after tracks were left twisted due to a landslip.
The damage was caused by a 'spoil tip' - coal-mining waste material - from Hatfield Colliery sliding under the track and causing it to break up.
Network Rail said it had been forced to close the line between Doncaster, Goole and Scunthorpe after the track became unsafe.

A train driver first reported concerns about buckling of the track in Stainforth, near Doncaster, in South Yorkshire, on Saturday but it was not until early yesterday morning that pit staff raised the alarm after the track conditions worsened. 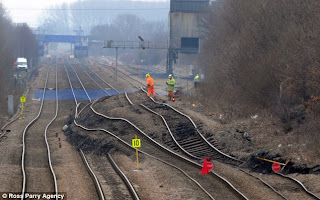 Rail passengers are facing major disruption today after tracks were left twisted due to a landslip in Stainforth, near Doncaster 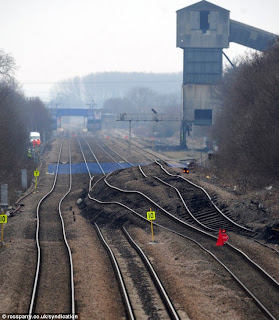 Network Rail said a number of services were affected with buses replacing trains between Doncaster and Goole and Doncaster and Scunthorpe, with journey times being extended by up to an hour

Posted by MYDEX XPRESSED CONSULTS at 5:14 AM