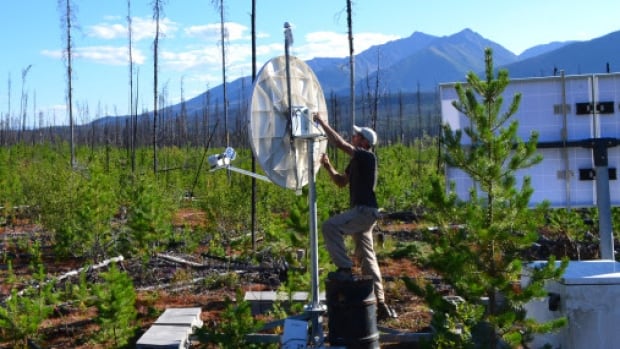 If you live in Victoria or Nanaimo in B.C., you experience the equivalent of a magnitude-7 earthquake every 14 months – it just happens so slowly that you don't notice it.

Now, scientists at the University of Ottawa and the University of California, Berkeley, have figured out what makes bizarre "slow earthquakes" recur so regularly and why some happen more frequently than others. They published their findings online Wednesday in the journal Nature.

Slow earthquakes are a strange phenomenon discovered only a dozen years ago, said Pascal Audet, lead author of the new study.

The first one was found on Vancouver Island.

"Victoria is right at the epicentre of these things," Audet said.

Like the sudden, violent earthquakes we are familiar with, they are caused by two tectonic plates on the surface of the earth sliding against each other at a boundary called a fault. 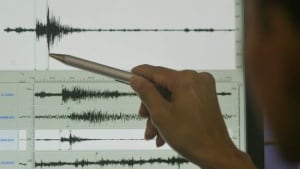 A regular earthquake registers on a seismograph. Slow earthquakes are detectable, but look like background "noise." (Associated Press)

"These slow earthquakes typically last for several days – 10 days to two weeks," said Audet, an assistant professor in the Earth Sciences department at the University of Ottawa.

In that time, the tectonics plates can slide as much as they do in a big, regular earthquake. For example, the slow earthquake on Vancouver Island produces a movement equivalent to a magnitude-7 regular earthquake, Audet said. That's bigger than the magnitude-6.6 quake that hit Port Alice, B.C. in April and similar to the Mexican earthquake a few days earlier that knocked down walls and was felt across six states.

The first slow earthquake ever discovered was detected on Vancouver Island from seismometer and GPS measurements along part of the Cascadia subduction zone that runs from B.C. to California. Subduction zones are faults where a plate on the bottom of the ocean is sliding down under the plate of a continent. More recently, other slow earthquakes have been found around the Pacific Ocean in other subduction zones.

But they all happen at different intervals – for example, one in Japan happens every six months and some slow earthquakes happen as infrequently as every two years. 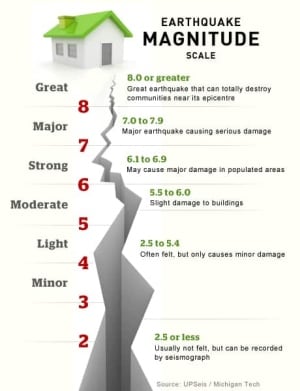 Slow earthquakes on Vancouver Island move the ground as much as a regular magnitude-7 earthquake. Click for bigger version. (CBC)

Audet wanted to know why.

To find out, he looked at seismic data from slow earthquakes in B.C., Japan, Mexico, Costa Rica and New Zealand. With some help from University of California, Berkeley, researcher Roland Burgmann, he compared the frequency of the slow earthquakes with other characteristics indicating the structure and composition of the plates.

What the researchers found is that higher levels of quartz in the crust corresponded to more frequent slow earthquakes. Quartz is known to be formed when fluids in the Earth's crust cool rapidly, so that provided clues to what could be happening.

Based on their evidence, the researchers came up with an explanation that seemed to fit their observations.

As the oceanic crust is pushed down into the subduction zone, it's subjected to higher and higher temperatures and pressures. Those cause the fluids to push back up toward the surface.

But the fault between two plates acts as a seal, Audet said: "It prevents the fluids from migrating up."

That causes the buildup of pressure until the fault slips. The fluid bursts out, cools and crystallizes into quartz.

Predicting the 'big one'

The results not only provide an explanation of how slow earthquakes work, but a better understanding of faults in general. That, in turn, may help scientists predict big, violent, ordinary earthquakes in the future. 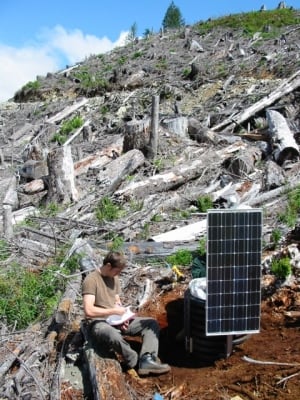 Audet has field research in B.C. on the Cascadia subduction zone, which stretches down to California. (Pascal Audet/University of Ottawa)

Like slow earthquakes, regular earthquakes are caused by a buildup of pressure, but solid pressure that isn't directly due to a buildup of fluids. Nevertheless, the two are related.

"Every time there is a slow earthquake that happens, it also puts a little bit more pressure on the part of the fault that produces the regular earthquakes," Audet said. "It puts the fault closer towards the next big earthquake."

However, scientists don't yet know for sure if slow earthquakes can directly lead to a "big one" because up until now, instruments that could measure the data necessary to show that haven't been well-placed during major earthquakes.

Audet added, "We'll have to wait for a really big earthquake again to test that."