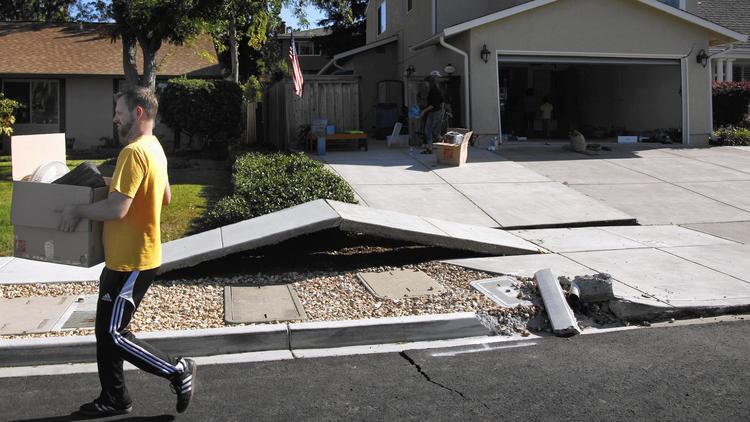 Scott Whitlock walks over a stretch of buckled sidewalk while helping his parents move out of their damaged home. The fault line was unknown to geologists before it ruptured in August. (Rick Loomis / Los Angeles Times)

After devastating earthquake in Napa, geologists flock to the area to study fault lines' damage potential

The results were surprising.

The earthquake tore up to the surface, producing a 9-mile-long scar that sliced through vineyards, asphalt and even homes. A buried earthquake fault had awoken along a trail never before documented or mapped by scientists, stunning homeowners who found houses spun off their foundations and broken, with one side of the home higher than the other.

It marked the first time since the 1971 Sylmar earthquake that a temblor in California has caused surface rupture in a residential area.

Now, the Napa County area is becoming a laboratory for scientists trying to better understand how faults work and the damage they can create. 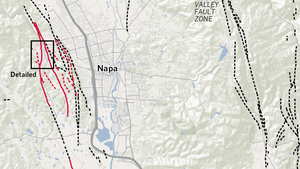 "We are going to be taking a really hard look now," said state geologist John Parrish. "Everyone should always be aware of where all of these faults are when they're building."

Homeowners in one Napa neighborhood said they had no idea they lived on top of an earthquake fault. The closest, previously mapped fault was farther away and considered by state officials to be too old to be active, last rupturing more than 11,000 years ago.

But inactive faults can awaken. And faults can exist even if there are no clues. Evidence of recent movement can be washed away, or, as in the case of this section of Browns Valley, buried deep underneath soil deposits eroding from the mountains. And scientists often have limited access to dig trenches and study possible faults in areas filled with homes that were built decades ago.

Scientists had their suspicions that a fault could be buried in this area of Napa, but held back from mapping it because there was not enough evidence.

"We can't go around just doing it on a gut feeling," Parrish said. "We draw the lines with the best information that we have available."

So it took an earthquake to answer questions scientists and homeowners didn't even know they had.

The fault began moving directly underneath the home of Tim and Ann Whitlock around 3:20 a.m. on Aug. 24, a Sunday.

They awoke to the earthquake fault rupturing, as one block of earth pushed past another.

Suddenly, what was once a solid foundation fractured in two. It sounded like one big explosion. The western half of the house moved nine inches to the north. The eastern half jumped, and ended up more than half an inch higher than the western half. 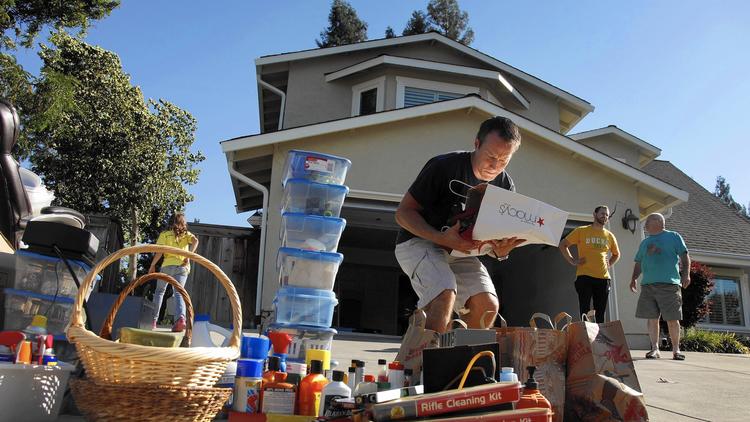 Phil Tessier helps Tim and Ann Whitlock move out of their home on Twin Oaks Drive in Napa after it was heavily damaged during the August earthquake. (Rick Loomis / Los Angeles Times)

"Ann and I just grabbed each other and screamed," said Tim Whitlock, a veteran of the Vietnam War who served in the U.S. Air Force and worked as an American Airlines pilot. "It was one of those things when you have no control whatsoever. And you're shaking. And you're thinking at any moment, the house could come apart and flatten. That's a terrifying thing," Whitlock said.

The damage was so bad that the city of Napa ordered the Whitlocks out of their house.

But neighboring homes suffered virtually no structural damage, underscoring how different it could be if the home is just a few feet away from the fault. There were only shattered dishes and fallen shelves at the home of next-door neighbor Dolores Hibbert, 86, she said.

Bill Bolton, 70, who shares his backyard with the Whitlocks, saw the fault split their backyard fence but skirt into his sideyard, avoiding his home before heading into the street, rupturing a water pipe and splitting apart another neighbor's lawn.

Said Whitlock: "Everywhere to the east and west, they got the rumble. And we got the damage."

Evidence is now emerging that the fault system that caused the earthquake had perhaps three to four large quakes before this one, said Tim Dawson, an engineering geologist for the California Geological Survey.

The agency has begun to officially map and zone this section of the West Napa fault, which could restrict or limit future construction in the areas where scientists pinpoint the fault.

Movement without a quake

The fault kept moving even after the earthquake and aftershocks stopped, further complicating the region's recovery. It's the first time this phenomenon has been observed extensively in a highly populated area in California.

The fault movement was easy to see on Highway 12, where the double yellow line in the middle of the road grew farther apart from each other in the hours and days after the earthquake. Scientists drove a truck up and down the Napa Valley, using lasers to measure the "afterslip" shifting roadways and vineyards.

Everywhere to the east and west, they got the rumble. And we got the damage. - Tim Whitlock, Napa resident

The work led to an afterslip forecast — the first of its kind. The earth could move between 2 and 6 inches in the next several years, said Ken Hudnut, a geophysicist for the U.S. Geological Survey. Scientists will be updating the forecast in February.

Scientists hope such a prediction would help homeowners strategize about repairs, and it could prove useful in future quakes. A good prediction could tell a train commuter system or water utility to hold off on immediate repairs because of anticipated fault movement, or plan for multiple repair jobs over several years.

The city of Napa has already allowed some homeowners to begin repairs after rigorous underground investigation. The city has been recommending homeowners to, when possible, completely move their new foundation away from the fault. But if they can't, because the property is too small, the city has been requiring much stronger, enhanced foundations that can survive some movement, said Rick Tooker, head of Napa's community development program.

As of December, more than 160 buildings were still red-tagged, or severely damaged, and more than 1,640 yellow-tagged, or moderately damaged. The city has issued about 980 earthquake repair permits, with many homeowners still waiting to see whether they can get some federal help for the repairs, Tooker said.

Whitlock said he was a little surprised that the city had allowed him to begin repairs to his house, which involved raising the home by six feet to put in a new, stronger foundation.

"But if they said I had to move, who would buy it? … We're just hoping it doesn't happen under our footsteps again," said Whitlock, who had to withdraw from his retirement savings to help pay for the repairs, expected to cost about $400,000. "Hopefully, it will hold together while we're still around."

Parrish, the state geologist, said it's risky to rebuild any structure across the surface trace of an active earthquake fault. He said stronger foundations haven't been proven to prevent structural damage in the future, because "there is no way to predict the amount of surface rupture movement, and thus it is impossible to build (within reasonable costs) a foundation that will accommodate an unknown amount of rupture," he said in an email.

The uncertainty has caused some to seek a home elsewhere. 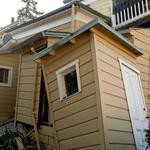 "We will be moving," said Edward Mays, 85, a former U.S. Marine and retired land surveyor for the East Bay Municipal Utility District, who lives across the way from the Whitlocks. His home was pushed off its foundation; his garage floor split by a giant crack.

"They say we're right on the fault line, and at our age, it's ridiculous to try to put a whole lot of money into redoing it."