A problem with your reference, Kim.   See screen shot below.  Do you have an alternate web site? 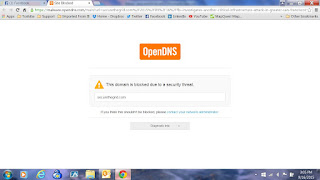 On Monday, September 14, unknown suspects cut backbone fiber optic Internet cables in Livermore California in what appears to be the fourteenth attack on critical communications infrastructure in a region of the U.S. that is a primary target for economic and cyber warfare.  Internet and phone services in Sacramento California were interrupted for twenty hours. The attack is a federal issue because AT&T's fiber optic network is considered to be part of the nation's critical communication's infrastructure. This most recent attack prompted AT&T to offer a 250 million dollar reward for information on the attack. This comes after 11 previous attacks on telecom infrastructure.

'Vandals' is the default term used to describe the unknown suspects but until the FBI takes someone to trial, a broader list of categories for the type of suspect and motive should be understood.  Like the nearby attack on the PG&E electrical substation in Metcalf California in 2013, security analysts hypothesize that such actions are probes by terrorists to measure response times, vulnerabilities, and lay ground work to inform greater capabilities. The case of the Metcalf substation showed the sophisticated planning and targeting of a military special operation. It was the cutting of telephone cables that precluded the assault rifle attack on the cooling encasement of a high voltage transformer that distributed power to Silicon Valley which was meant to keep alarm signals from reaching critical personnel.

Targeting critical infrastructure like communications and power supplies is an old tactic for both conventional and asymmetric warfare. Such attacks by terrorist have been carried out in recent years by al Qaeda in Yemen, FARC in Colombia, and Baluchistani rebels in Pakistan. Rogue states are suspects as well. North Korea is believed to have conducted cyber attacks against South Korean hydro electrical generation plants and many believe that Iran was behind the cyber attack that took down the electrical grid in Turkey. In the Pakistani case, the electrical generation needed to cool nuclear power plants went off line but were restored.

Most of all of these recent attacks in the U.S. occurred out West. An almost identical severing of Internet cables in Arizona this February left law enforcement and hospitals without crucial databases. In 2014 a bomb exploded at the Nogales substation that powers U.S. Border Patrol facilities at the Nogales U.S./ Mexican border.

Besides rogue states and terrorists, there is another group with an incentive to probe the security of the greater San Francisco and San Jose areas. These physical attacks and cyber attacks can be interpreted as acts of economic warfare and cyber warfare by Russia or China. Chinese cyber warfare doctrine, for example, may see disabling U.S. cyber capabilities with physical or High-altitude Electromagnetic Pulse Attack as an act of cyber or economic warfare. The San Francisco area and Silicon Valley are unique targets for economic, cyber, and intellectual property.  That is intellectual property to which the U.S. loses billions of dollars a year to Chinese and Russian espionage targeting the intellectual capitol heavy firms that reside there.  The Lawrence Livermore National Labratory which has long been a target of foreign intelligence services is also in the area.