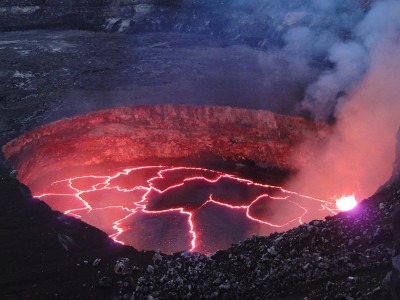 Over the past 7 years, the "Overlook crater" near the summit of Kilauea Volcano has grown from just 35 to more than 200 meters wide and now hosts one of the largest lava lakes in the world (shown here). Recent research sheds light on gas-pistoning activity that may have contributed to the dramatic rise and fall of lava columns connected to the crater. Credit: USGS

It's been 7 years since an explosive eruption left a massive hole in Halemaʻumaʻu crater, just below an overlook point at the summit of Kilauea Volcano in Hawaiʻi Volcanoes National Park. As the surrounding walls have collapsed, the "Overlook crater" has grown from just 35 to more than 200 meters wide and now hosts an impressive lava lake. Scientists suspect the lava lake's depth, estimated at around 200 meters, makes it among the largest in the world.

The action has been monitored by a network of Hawaiian Volcano Observatory seismometers, which allowed Chouet and Dawson to track tremors originating from a kilometer below the surface. Before the lake formed, the instruments caught degassing bursts from the top of the lava column. Since then, much of the seismic activity can be explained by rockfalls as the crater grows. A third type of activity is more puzzling, consisting of unusual pressure drops from somewhere within the magma system, but with no signs of disturbance on the lake's surface.

The authors focused their efforts on a fourth type of activity known as gas pistoning, in which the lava column sees a cyclic approximately 20-minute-long rise and fall of its thinly crusted surface. During one such period, recorded in high detail over 5 days in the summer of 2011, the lava column swelled by tens of meters and featured hundreds of gas piston events. Geologists say the activity is caused by the accumulation of gas in a layer of foam at the top of the column before it's released—often forcefully when the foam collapses.

The pair tracked the signature to a single point source that sits 1 kilometer below Halemaʻumaʻu crater's eastern flank. The seismic waves also map out the volcano's plumbing system, which consists of pipes, dikes, and fissures beneath the park that correspond well to previous attempts to chart the underground network.

Using numerical simulations, the researchers calculated that layers of foam—perhaps tens of meters high—grew and collapsed over the 5-day period and that the gas-pistoning activity likely happened in a 6-meter-wide pipe that connected the crater to an adjacent dike system. This study is central to determining the behavior of the magmatic system beneath Halemaʻumaʻu and volcanic systems in general, protecting communities in Hawaii and around the world. (Journal of Geophysical Research: Solid Earth, doi:10.1002/2014JB011789, 2015)