Iceland's volcano pales before giants that may have sped U.S. settlers and led to 'Frankenstein' 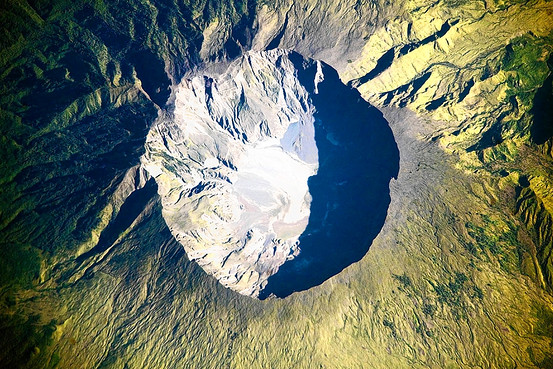 On the evening of April 5, 1815, on the island of Sumbawa in what's now Indonesia, a volcano named Tambora began to rumble and cough. It sputtered on and off for days. Then on the 11th and 12th, eruptions shook houses and boats hundreds of miles away. Over 10 days, Tambora belched 24 cubic miles of lava and pulverized rock (try to imagine a cubic mile of anything), and created a crater more than three miles wide and nearly a mile deep.

Flowing lava, flying rocks and deadly gases killed thousands of people on Sumbawa, which is near the Equator, and nearby islands. Earthquakes and tsunamis killed tens of thousands more. Hundreds of millions of tons of ash and dust filled the sky, turning days into nights and blanketing the nearby island of Bali in a foot of volcanic ash. It smothered vegetation on islands for hundreds of miles around, and carpets of floating pumice covered the seas. An estimated 117,000 people in the region, then known as the Dutch East Indies, eventually died, many from starvation caused by crop failures and epidemics of disease. And that was just the beginning. 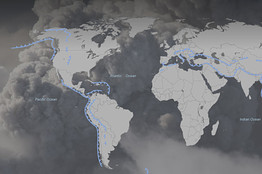 See a map and a timeline of volcanic activity

The eruption from Iceland's Eyjafjallajökull volcano, which has disrupted air traffic across Europe, is dwarfed by Tambora's explosive power—the U.S. Geological Survey calls it "the most powerful eruption in recorded history." Because news in those days traveled by ship, word of Tambora's devastation spread slowly in comparison to the better-known and better-documented eruption of Krakatoa, 68 years later (after the invention of the telegraph in 1837). But at 24 cubic miles of debris, Tambora was much bigger than Krakatoa (the low estimate was 3.5 cubic miles), the famed Vesuvius (1.4 cubic miles) and the 1980 eruption of Mount St. Helens in Washington (0.3 cubic mile). In comparison, Eyjafjallajökull is little more than a planetary popped zit. So far.

Since ejected debris volumes are educated guesses that vary widely and get revised a lot, scientists in 1982 came up with something called the Volcanic Explosivity Index (VEI), similar to the Richter scale for earthquakes, to put eruptions in perspective. It's subjective too, weighing volcano blasts, the volumes of solids and gases they burp, how far up they go and their overall explosive power, on a scale of 1 to 8. Each number is 10 times bigger than the last. There haven't been any eights in human history, but Tambora was a seven. Krakatoa was a six, or 10 times less powerful. 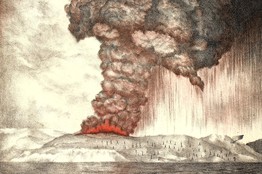 WHERE: Indonesia
YEAR ERUPTED: 1883
VOLCANIC EXPLOSIVITY INDEX: 6
Its eruption was heard in Perth, Australia, 1,930 miles away. 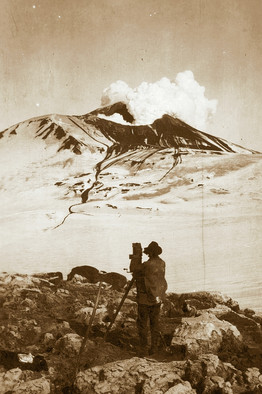 WHERE: Alaska
YEAR ERUPTED: 1912
VEI: 6
The 20th century's largest eruption , yet so remote that there were no deaths. 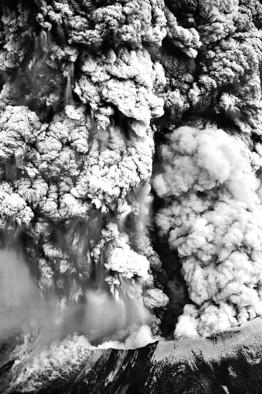 WHERE: Washington
YEAR ERUPTED: 1980
VEI: 5
The most destructive volcano in U.S. history took 57 lives and caused more than $1 billion in property and economic losses. 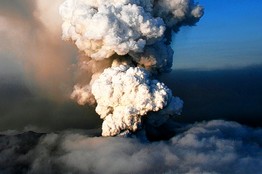 The Iceland volcano? Only a two or three. That puts it around 10,000 times less powerful than Tambora. But if Eyjafjallajökull's relatively circumscribed atmospheric offerings can ground air traffic, disrupt commerce, strand tens of thousands of people and cost the airline industry billions, imagine what a modern Tambora might achieve.

Like a giant cannon, Tambora blew ash, dust and an estimated 400 million tons of sulfurous gases some 27 miles straight up into the stratosphere, high above the weather. This material blew up and through the troposphere—the layer nearest Earth's surface where clouds, wind, rain and 75% of the weight of the atmosphere (nitrogen, oxygen, trace gases and water vapor) reside. The troposphere is 4.8 miles thick at the North and South Poles and 9.6 miles thick at the equator. Tambora blew its load more than 17 miles beyond it, up where the air is super-thin and a layer of ozone protects the Earth from the sun's ultraviolet rays.

There, the pull of the Earth's gravity is very light, so the ash and dust floated and spread into a thin veneer circling the globe. The sulfurous gases mixed with water vapor and ozone to create an aerosol of sulfuric acid. The particles and molecules, under gravity's gentle pull, slowly sank into a layer that blanketed the planet and reflected the sun's warming rays back into space. Over several years, it settled into the troposphere, where winds and rains eventually deposited it on Earth.

The 20th century's biggest eruption occurred in 1912 in Alaska. With a VEI of six, Novarupta (for decades scientists thought it was Mount Katmai, six miles away, but one fed the other) created a big uproar, but then big volcanoes went quiet for decades. Through two world wars, the Great Depression and much of the Cold War, climate and weather was so moderate and predictable that governments, comforted by the notion that one year was so much like another, could plan ahead—and spend ahead. There were little eruptions here and there, but nothing much to worry about during the decades in which the jet engine was perfected to fly efficiently in a normal atmosphere. The British Overseas Aircraft Corp. inaugurated commercial jet service in 1952.

In 1980, Mount St. Helens blew its top in the state of Washington, drawing a lot of attention because it was "our" volcano and, thus, local news. It even rated a five on the Explosivity Index, which doesn't seem fair since it blew mainly sideways and didn't put much gunk into the stratosphere. 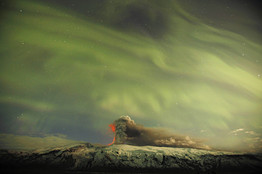 In 1982, Mount Galunggung (VEI 4) in West Java, Indonesia, almost shot down a British Airways 747 cruising at 37,000 feet from Kuala Lumpur to Perth through its ash cloud. The plane's four engines died, it glided out of the ash down to 13,000 feet, where Engine No. 4 was restarted, then the others, and an emergency landing at Jakarta saved 248 passengers and a crew of 15.

That was a spectacular wake-up call, but that same year a volcano 10 times more powerful, El Chichón (VEI 5) on Mexico's Yucatán peninsula, would usher in the return of stratospheric calamity. It punched so much sulfurous gas into the stratosphere that airlines world-wide were flying through acid mists.

Except for the windows pilots look ahead through, airplane windows are made out of plastic. Sulfuric acid eats plastic. You can see little reflective stars in them. It's called "star crazing." After El Chichón, airlines found that windows were crazing up in months instead of years—especially on routes that flew over the poles through the stratosphere where the acid cloud hung on and on, seemingly defying gravity. Every flight from New York to Tokyo, for example, went through it. Repolishing the windows cost tens of millions.

The 20th century's second biggest blast, a Krakatoa-like VEI 6, came in 1991 when Mount Pinatubo on Luzon in the Philippines killed 800 people, left 100,000 homeless and put enough ash and gas into the stratosphere to lower the average temperature of the planet by 0.9 to 1.1 degrees Fahrenheit over the next two years, disrupting weather patterns. But it, too, was relative child's play.

In the summer following Tambora's 1815 eruption, crop failures dotted the northern hemisphere—rice failed in parts of China, wheat and corn in Europe, potatoes in Ireland (where it rained nonstop for eight weeks and triggered a typhus epidemic that killed 65,000 and spread to England and Europe). At Lake Geneva in Switzerland, vacationers from England sat out gloomy June storms reading ghost stories and composing their own. Lord Byron wrote a narrative poem, "Darkness," in which there was no sun, "no day." His personal physician, Dr. John Polidori, wrote "The Vampyre," and Mary Shelley began "Frankenstein." Famine spread across Switzerland. Food riots and insurrections swept France, which had already been caught up in the chaos following Napoleon's 1815 defeat at Waterloo.

Tambora may not have been the sole cause of these disasters. Smaller eruptions of volcanoes had taken place in the Caribbean (Soufrière on St. Vincent in 1812) and the Philippines (Mayon on Luzon in 1814). The planet, beginning in the 15th century, had been going through periods of intense climatic change—sharp cooling and warming now collectively known as the Little Ice Age. In the coldest periods, mountain glaciers advanced around the world and the Thames River in London froze over in winter. But the most severe periods of cold seemed to be abating when Tambora came along. Its effects came as a jolt.

In New England, 1816 was called "the year without a summer" because there were crop-killing frosts every month, including the normally frost-free months of summer, across the region. It snowed in Virginia in June and again on the Fourth of July. At Monticello, Thomas Jefferson, the retired president, had such a poor corn harvest that he had to borrow $1,000 to make up for lost income. In New Haven, Conn., the last frost of spring was on June 11, and the first frost of autumn on Aug. 22—shortening the normal growing season by 55 days. Corn, the staple crop of New England, couldn't mature under such conditions. Crop failures were widespread. In Connecticut, three-quarters of the state's corn crop was too unripe, soft or moldy to make corn meal.

While New Englanders faced food shortages and higher prices, they did not experience famine. But the hardship was a tipping point that helped propel Yankee farmers off the land. In their elegant 1983 book, "Volcano Weather: The Story of the Year Without a Summer," Woods Hole oceanographer Henry Stommel and his wife, Elizabeth, wrote: "The summer of 1816 marked the point at which many New England farmers who had weighed the advantages of going west made up their minds to do so."

The great migration westward had already begun, but Tambora gave it a boost. The year without a summer, for example, helped convince the New York State legislature to support a proposed canal from the Hudson River to the Great Lakes, which would help farmers along it market their produce. Funds were authorized in April 1817, and construction began on the Fourth of July. The Erie Canal, built without federal money, opened in 1825. The federal government at the time was preoccupied with finding a way west that started closer to the capital; that is, building an interstate road threading through the mountains from Cumberland, Md., to Wheeling, then in the state of Virginia on the Ohio River. This so-called National Road, built on a foundation of stones, opened in 1818.

Access to the Ohio Valley and beyond through the Erie Canal and the National Road set the stage for the transformation of the Midwest from forests to farms that would last through the 19th century and well into the 20th.

—This essay was adapted from a forthcoming book about the history of American battles over wildlife and forests.

Its eruption was heard in Perth, Australia, 1,930 miles away.

The 20th century's largest eruption , yet so remote that there were no deaths.

The most destructive volcano in U.S. history took 57 lives and caused more than $1 billion in property and economic losses.