The Santiaguito volcano showered sand and ash on Monday over a large area of western Guatemala in an "unusual" and "violent" display, the national seismological institute said.

The institute said winds were carrying the ash in a northeasterly direction from the 2,500 metre (7,500 foot) high volcano in the province of Quetzaltenango, 206 kilometres west of the capital.

The ash plume spread across six provinces, raising fears of damage to crops, the institute said while classes were suspended at schools in three provinces.

Santiaguito's worst eruption occurred in 1929 when 2500 people were killed. 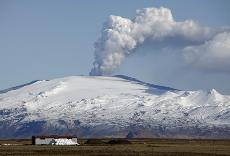 Seen from near Hvolsvollur, Iceland, a plume of ash, dust and steam from a volcano erupting beneath Iceland's Eyjafjallajokull glacier towers.
CAPTION
Carolyn Kaster, AP
The Eyjafjallajökull volcano continues to erupt, but a much lower levels then when it began its explosive eruption stage on April 14, say the Icelandic Meteorological Office and Institute of Earth Sciences. However, it's still spewing out an estimated 22 to 44 tons of magma a second.

According to reports being posted daily on the Icelandic Met Office web site, the plume of volcanic ash from Eyjafjallajökull is gradually declining. It's unclear how high the eruption plume was yesterday because of cloud cover, but it did not reach 3.2 miles (the height of the clouds.)

The eruptive material tephra (small rocks and lava fragments) coming out of the volcano are much coarser than during the first four days of the explosive eruption phase. The explosions can be heard six to nine miles away. On Saturday, lava was spattering 330 feet into the air but that had subsided by Sunday.

The seismic tremors are similar to what they have been for the past few days and don't appear to be increasing in severity. There was one earthquake with a magnitude of 1.4 at Eyjafjallajökull on Sunday.