Pelvoca says no, it won't, but regardless, I am still translating daily updates from the Canaries' and Spanish news sources on my Vei8 website. Last week, one of the "walls" of the building volcano collapsed and according to Pelvoca the volcano "has taken a new course." I seem to get more information from the Spanish news site than the Canaries', and that is the consensus from the former.

The major worry at this point is if there will be an eruption on El Hierro. If you look at a map, the rates of deflation are significant near Frontera, which is on the opposite of the island from Restinga. If the eruption should occur in the waters off Frontera, the eruption will never make it to the surface, due to the drop off there, which is fairly deep (200 meters). However, if the eruption should occur in Frontera, then the entire island will probably have to be evacuated. Currently, the biggest risk is from the CO2 fumes; last week, a National Geographic scientist was overcome by them and so the beach near Restinga, which is still devoid of people, was closed off. Rescue plans are in place, as well as diversions from several inland roads and tunnels.

The eruption site in the images has switched from blowing pumice to basalt-some pieces over a meter long. I'll wait until the end of the day, in order to post the news to ensure that I have the latest updates available. In the meantime, I have a cam (from Pasto, Columbia) image that updates every 10 minutes focused on Galeras, and Kim will soon have that same image on his blog page. Either location is a good place to watch.

For those members seriously into volcanoes, one can download the Yahoo widget that is a webcam. If interested, I can tell you which one is the best. I currently have 4 cams showing live images every few minutes that I can see from a drop down menu, but for two of those cams, I have entered the locations of 150 cams that I can switch to at a moment's notice. Also, the widget can take images and save them to a folder of your choice. It's kind of amazing that one can sit in the comfort of one's own home and see current images from Antarctica to Jan Mayen.

A good source for keeping up on the latest earthquakes, eruptions, weather, and daylight is made my Catfood software. I have it as my wallpaper and it constantly updates about every 10 minutes. It uses very little of the CPU's resources and I don't think I could manage without it.

Stay tuned for more info from El Hierro and other parts yet to be revealed. :-)

First shot when the sun came up 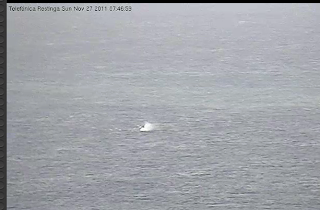 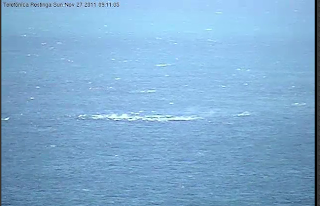 TIP
On the Mac I made a web clipping of that web cam and it has been on my Mac Dashboard for the last two weeks.
To make sure it updates even when I am not even looking at it, in properties I set it to keep active BY UNCHECKING "Only play audio in Dashboard"
That keeps the web cam active at all times on my Mac Book Pro. 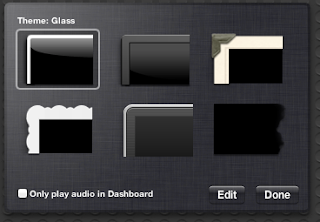 Who knows?
I am going to bed.