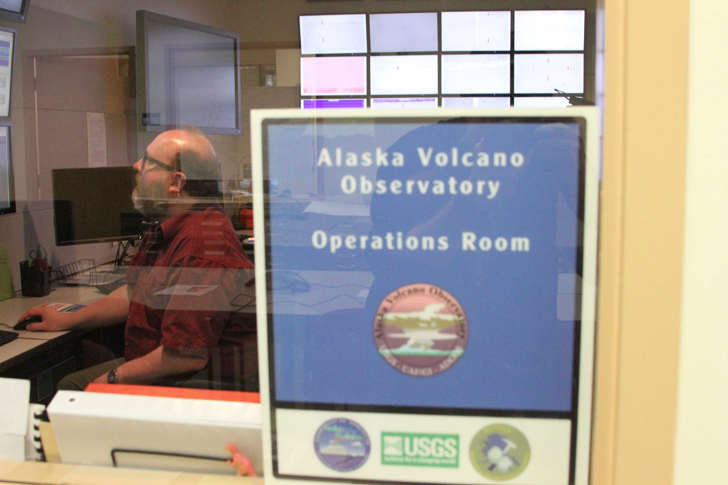 © Mark Thiessen/ AP Photo Dave Schneider, a U.S. Geological Survey geophysicist with the Alaska Volcano Observatory, is shown at the operations center Tuesday, March 29, 2016, in Anchorage, Alaska. A remote Aleutian volcano erupted on Tuesday sending a cloud of ash into the air and forcing scientists to raise alerts to the highest levels, a monitoring website said.

Pilots reported a short-lived explosive eruption and an ash cloud rising to about 34,000 feet (10 km) above the Bogoslof Volcano about 4 p.m. local time, the Alaska Volcano Observatory said on its website.

About an hour later, another pilot reported activity at the 492-foot (150 m) Bogoslof Volcano had decreased, the observatory site said.

Uninhabited Bogoslof Island is part of Alaska's Aleutian archipelago, a geologically active chain of volcanic islands that is part of the Pacific Ring of Fire and is very prone to earthquakes.

The explosion caused the monitoring center to raise the aviation color code to red and the volcano alert level to warning, the highest levels.

There is no ground-based volcano monitoring equipment on Bogoslof, so the observatory cannot forecast future activity, the website said.

"We will monitor satellite images and data from distant seismic and infrasound instruments for indications of significant explosive activity," the observatory said.

On Oct. 24, Alaska Volcano Observatory scientists raised the alert level to orange from yellow for the Cleveland Volcano, on the uninhabited Chuginadak Island, after an explosion was detected on the mountain and heard by residents of a tiny village some 45 miles (72 km) away, a monitoring website said.

The Alaska Volcano Observatory is a joint program of the U.S. Geological Survey, the Geophysical Institute of the University of Alaska Fairbanks and the State of Alaska Division of Geological and Geophysical Surveys. (Reporting by Brendan O'Brien in Milwaukee; Editing by Paul Tait)