[Geology2] Volcano Watch: Things are not always what they seem

Volcano Watch: Things are not always what they seem 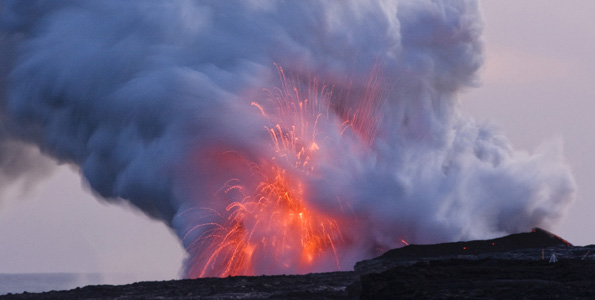 As lava entered the sea in July 2008, littoral explosions sent incandescent lava fragments skyward, building a small littoral cone on the flank of Kilauea. (Photo courtesy of USGS / B. Gaddis)

The Hawaiian Islands are home to numerous beautiful landforms. The islands themselves are volcanoes, but these volcanoes are speckled with secondary landforms.

The "cones" along the coast are littoral cones. Littoral cones are a type of volcanic landform created when lava flows come into contact with the sea. Littoral is a word that means "of or pertaining to the shore of a lake, sea, or ocean."

When seawater and lava interact, the water is converted instantly to steam. This transformation is so abrupt that steam-driven explosions occur. The explosions fragment the lava and propel lava bombs and tephra into the air. The fragments deposited on shore form the cones.

This fragmentation process has to continue over and over to generate enough volcanic debris to form cone-shaped mounds. Another condition necessary for the creation of littoral cones is a favorable wind direction. If the winds are blowing off shore, the explosive products will be carried seaward and disappear into the ocean.

The fragments in littoral cones are denser and contain fewer vesicles than primary vents along the rift zones. They are also coarser, more angular, less glassy, and contain a greater proportion of older rock. In addition, there are some tell-tale characteristics to look for on the ground. Littoral cones are usually bisected by a feeder channel or tube system and are usually arcuate but do not form a complete circle. The range of products — much more diverse than in primary vents—reflects the explosive nature of cone formation.

On the Island of Hawaii, there are more than 20 littoral cones. Many of them are located on the southern and western coasts of the island. Three eruptions in the past 200 years formed large littoral cones: in 1840 on Kilauea and in 1868 and 1919 on Mauna Loa.

The 1840 eruption of Kilauea entered the sea near Honolulu Landing in Puna, producing the Sand Hills. This eruption flowed into the sea for nearly a month and formed three littoral cones.

Today, only the remains of one cone are preserved; the other two hills were swept away by the sea.

The Mauna Loa eruption of 1868 was spectacular for various reasons, but one prominent result of that eruption is Puu Hou (New Hill). Puu Hou is the largest littoral cone in Hawaii, standing 73 m (240 ft) tall. It is easily visible from Highway 11, just west of Ka Lae (South Point) at the coast.

It was once thought that littoral cones formed only when aa lava flowed into the sea. Geologists felt that aa provided more nooks and crannies for lava-water interaction than did pahoehoe. The greater surface area increased the frequency of hydrovolcanic explosions. But the current eruption of Kilauea has shown that littoral deposits can be formed from pahoehoe flows, as well.

Many other examples of littoral cones can be seen along Mauna Loa's south and southwest coastline. All of the puu, or cones, seaward (makai) of Highway 11, from Kahuku Ranch (the Kahuku fault scarp) to Kauna Point and northwest to Puu Ohau, are littoral cones. Spectacular examples are found at Pohue Bay, "Road to the Sea," and Auau Point.

According to the Roman poet Phaedrus, "Things are not always what they seem; the first appearance deceives many; the intelligence of a few perceives what has been carefully hidden…."

Along Highway 19 — between Makalawena and the resort community of Kukio, makai of the highway — is a puu call Kuili.

Is this a littoral cone? The answer will be revealed in next week's Volcano Watch.

Penguin News Today
The Science of Penguins
The Gentoos are back! Come see them on live cam at:
Gentoo Penguins of Gars O'Higgins Station, Antarctica