[Geology2] Taking the measure of an earthquake

Taking the measure of an earthquake 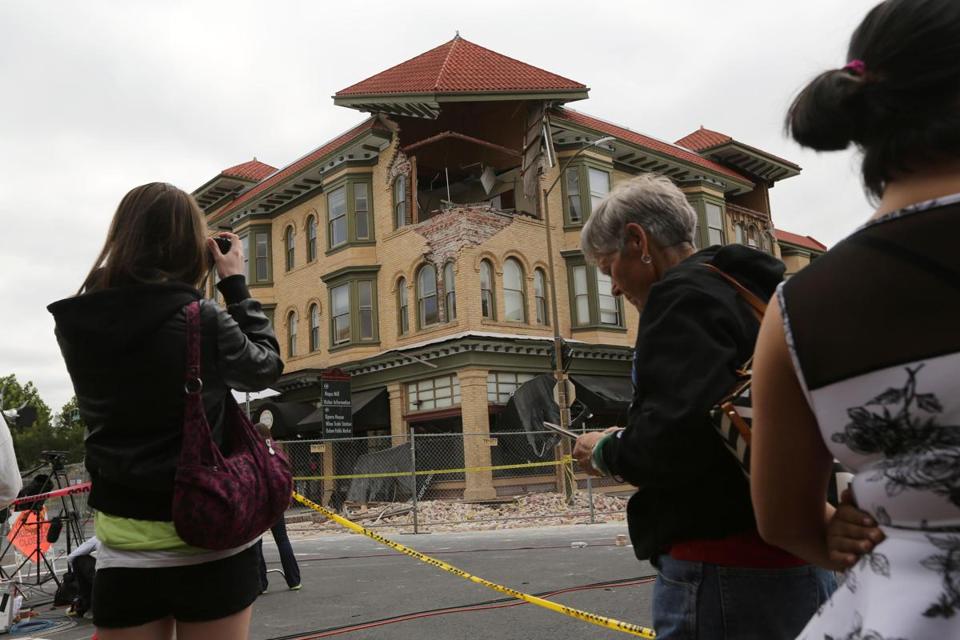 A building in Napa, Calif., damaged by Sunday's earthquake was the subject of attention Monday.

Sunday night, a magnitude 6.9 earthquake struck a remote part of Peru. Earlier that day a 6.0 shook the vineyards and homes of Napa, Calif., sending over 100 people to the hospital. The California earthquake was the worst to hit that state since 1989, when a massive quake broke the Bay Bridge and killed 63 people.

When earthquakes strike, the first headline is usually a number, 6.0 or 6.9 or 7.2. You already know that these come from something called the "Richter scale," but what does that mean? And why does a 7.0 earthquake sometimes cause less damage then a 6.0?

Considered on their own, those Richter scale numbers can be pretty misleading. The 6.9 earthquake in Peru Sunday was actually 22 times stronger than the 6.0 in Napa.

What does the Richter scale measure?

The Richter scale measures the amount of energy released during an earthquake, but it does so indirectly, using a mathematical adjustment called a logarithm (if the last time you heard about logarithms was in Ms. Degenero's math class, don't worry there's no quiz).

The value of logarithms is that they help solve a basic problem with measuring earthquakes. The difference between small and large earthquakes is enormous, so big that it's genuinely hard to compare them.

For example, let's say you want to measure the length of lots of different things. Cats, for instance, and also Shaquille O'Neal, and the Washington monument, and the distance to the moon. If you try to compare these directly using feet (or inches or miles), you find that it's very difficult to find a usable scale.

Logarithms have the useful feature of making large differences comparable. The trouble, though, is that you end up with a series of numbers that have little intuitive meaning. What does it mean, for instance, to say that Shaquille O'Neal is .85?

Is there an alternative?

One approach is just to forget the logarithmic adjustment and look at the raw amount of energy released by various earthquakes. What you find is that a 1.0 point increase on the Richter scale translates to a 30-fold increase in the size of an earthquake.

The last big earthquake to shake the ground of Massachusetts was a magnitude 5.8 event that radiated out from Virginia in 2011. It released 31 TeraJoules of energy, which is roughly the same as 30,000 lightning bolts.

Yesterday's earthquake in Napa was twice as powerful as that, despite being only .2 higher on the Richter scale.

One of the biggest recorded earthquakes in Massachusetts occurred in 1755. It was twice as big as the Napa quake and four times as big as the 2011 Virginia quake.

All else being equal, more energy generally means more damage. But of course, all else is not equal. There are a lot of other factors to consider and the quakes that release the most energy aren't necessarily the deadliest.

1) Nearby populations. Sunday night's Peruvian quake happened in a remote area and may not have injured anyone. Earthquakes centered in populated areas tend to affect more people.

2) Quality of infrastructure. Wealthy, earthquake-prone cities like Tokyo and San Francisco have building codes specially tailored to withstand such forces. The deadliest and most devastating earthquakes thus tend to afflict poorer areas, like Port-au-Prince in 2010 or Southwestern China in 2008.

3) Depth. Some earthquakes happen deeper underground than others, and the deeper they are the more limited their impact on those of us who live on the surface.

4) Indirect consequences. Hundreds of thousands of people were killed in Indonesia when a 2004 earthquake triggered a massive tsunami. A 1970 earthquake off the coast of Peru triggered landslides that killed tens of thousands.

Are we getting any better at predicting earthquakes?

Despite some growing optimism, scientists mostly lack the ability to effectively predict earthquakes.

It is possible, however, to do a better job explaining the size and power of earthquakes. And that means not just talking about the numbers on the Richter scale, but finding other, more intuitive ways to describe the huge amounts amount of energy being released.