[Geology2] Lassen Peak Is Sinking, and Volcanologists Don’t Know Why 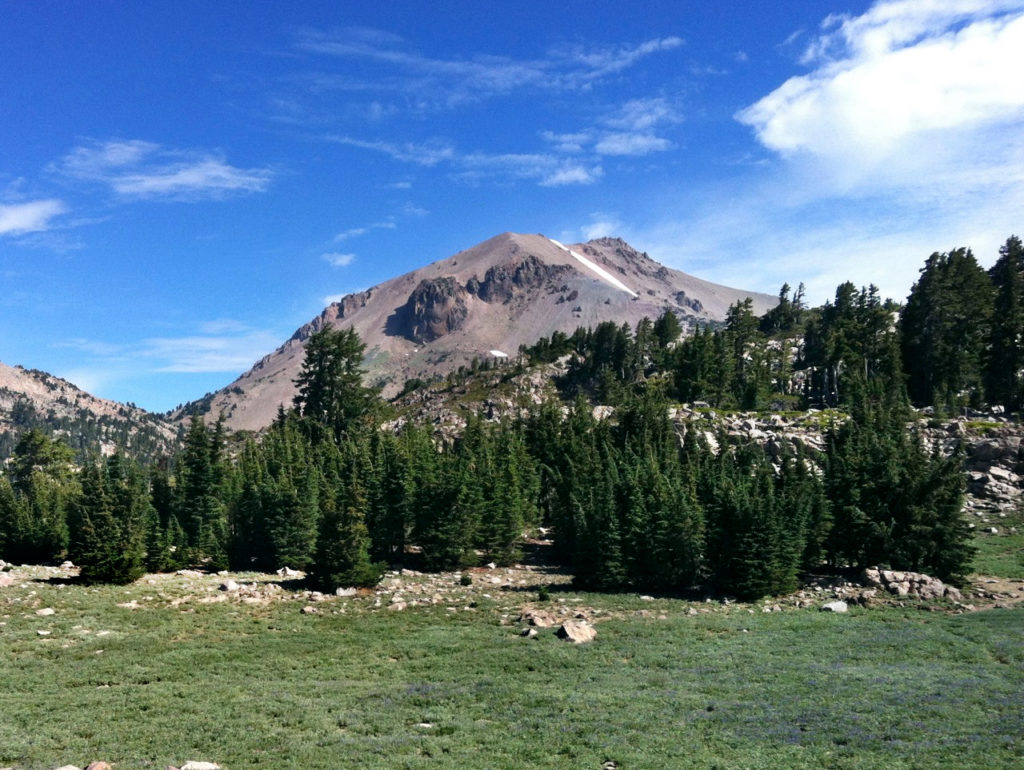 Lassen Peak in northern California. The area around the active Cascade volcano has been sinking since the early 1990s.Erik Klemetti

Most people tend to think of the Earth's surface as a static thing. It is solid and persistent … however, that is far from the truth. Images from earthquakes show how land can be broken and buckled with ease during one of these massive seismic events, but the surface can deform in even more subtle ways.

Take the Lassen Volcanic Center (a place near and dear to me). It last erupted in 1915, when Lassen Peak had its small but historically significant blast. After 100+ years, you might not expect that much is currently changing in the area. But data presented in a new paper by Amy Parker and others in the Journal of Volcanology and Geothermal Research shows that since the mid-1990s, the whole area has sunk!

The team examined satellite data from 1992 to 2010 and found that an area 30-40 kilometers (19-25 miles) across centered near Reading Peak (see below; just southeast of Lassen Peak) has been sinking at a rate of ~10 millimeters (~0.4 inches) per year. So, over that span the Lassen Peak area has subsided ~18 centimeters (~7 inches).

That measurement wouldn't be possible without using satellites to detect very minute changes in the Earth's surface over years to decades—in this case, with Interferometric Synthetic Aperture Radar, more commonly known as InSAR. This method uses precise measurements of the Earth's surface performed by satellites that were captured some time apart and then compares them, looking for where the data (land surface elevation) no longer matches, producing interference in the images. Then these interferences are converted into values of up and down based on the extent of interference. Considering InSAR uses microwaves to determine the elevation, things like cloud cover and night don't matter when the measurements are being taken. The only trick is you need to have the satellite pass over the same place multiple times to be able to compare the images.

InSAR is advantageous because it can not only measure small changes on the elevation of the Earth's surface, down to centimeter scale, but also because it can look at large geographic areas. The method can survey wide areas impacted by motion on a fault during an earthquake to see how the land surface has moved. It can examine entire volcanic arcs (or large stretches of them) to see which volcanoes might be showing signs of changes. Of course, our data set is limited due to the coverage of the satellites that can do these measurements (there aren't many) and the fact that InSAR hasn't been employed for more than a few decades. 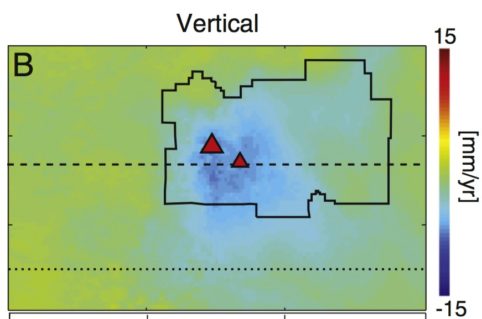 Now, how long has this sinking been happening at the Lassen Volcanic Center? Parker and others looked at land-based geodetic data collected by leveling for the last 70 years and found no measurable evidence for subsidence prior to the early 1990s. Now, it could have been subsiding at a very low rate that wasn't measured, although the total across that span should have been noticed if it was sinking. So, it seems that this sinking is a (geologically) recent event in the Lassen area.

When you have geophysical data such as this, one thing you want to do is try to model the shape of the area causing the changing of the Earth's surface. In this case, Parker and others estimate that the source causing the sinking is a singular point (or centered around a point) that is ~8.3 kilometers (5.2 miles) beneath the volcanic center. It isn't directly under Lassen Peak, but offset to the southeast under some of the more hydrothermally active areas in the Lassen Peak area. It is at a depth that is roughly the same as where we think magma is being stored underneath the Lassen Volcanic Center, so that gives us that first clue to why the area is sinking.

Trying to identify why Lassen Peak and vicinity is sinking is a little tricky. As I just alluded, the most likely culprit is cooling and crystallizing of magma after the 1914-17 eruptions of Lassen Peak. As magma cools, it loses volume, so any new magma that trigger the eruption over 100 years ago may be slowly losing volume.

This can't alone account for the sinking, especially the timing as it appears to have started over 70 years after the eruption ended. You might expect that the sinking would have happened soon after the eruption ended (because you've expelled all that volume of magma and volcanic gas). However, as I mentioned above, Walker and others think that this sinking started only in the early 1990s. So, what else could be helping the subsidence beyond potential cooling of magma? 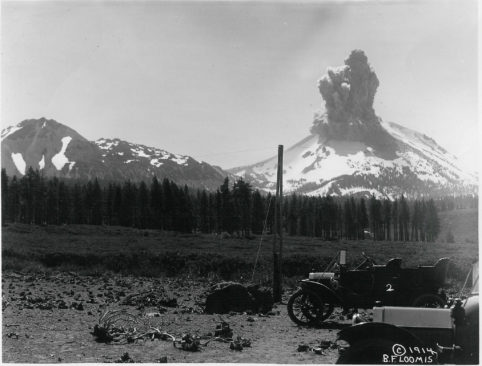 A photo of Lassen Peak erupting in 1915 by B.F. Loomis.National Park Service

You can also change the flow of hydrothermal fluids (water heated by magma at depth) underneath the area to prompt subsidence. There is some loose correlation between the times of greater subsidence between 2004-07 and more earthquakes within the area of the hydrothermal system, so there could be connection there. There is even the chance that the M7.3 Landers earthquake in 1992, centered about 840 kilometers (520 miles) away, might have started the ball rolling as that earthquake seems to have triggered a M3.5 earthquake at Lassen within 13 minutes. However, these events are still correlations rather than causations without further study.

That being said, some of the sinking might not be related to the magmatism at the Lassen Volcanic Center at all. Local faults related to the Basin and Range province, where North America is stretching, are causing a deepening basin around the Lassen Volcanic Center and the warmer nature of the crust in the area (thanks to Lassen and friends) might mean this area is susceptible to more sinking compared to cooler areas. Medicine Lake in northern California is one of the other volcanoes in the Cascades that is also sinking. Studies there point the finger at tectonic forces along with cooling of a magma body at depth, so this combination might be a common occurrence in the Cascades.

Now, if you read this and think "huh, sounds like geologists don't know much about why a volcano subsides", you'd be right. Although dozens of volcanoes worldwide are subsiding (based on InSAR and other observations), for most we don't have a good grasp on exactly why. Some have had recent eruptions, others haven't erupted for millennia. Careful GPS surveys of these volcanoes (in cahoots with InSAR data) are needed to figure out all the vertical and horizontal pieces involved in the subsidence. Maybe then we can parse out each piece—magmatic, tectonic, hydrothermal—and then use these data to tell us about how volcanoes are behaving between eruptions and whether these changes can give us hints as to what might be next.