[Geology2] Activity at Jan Mayen and the hotspot conundrum 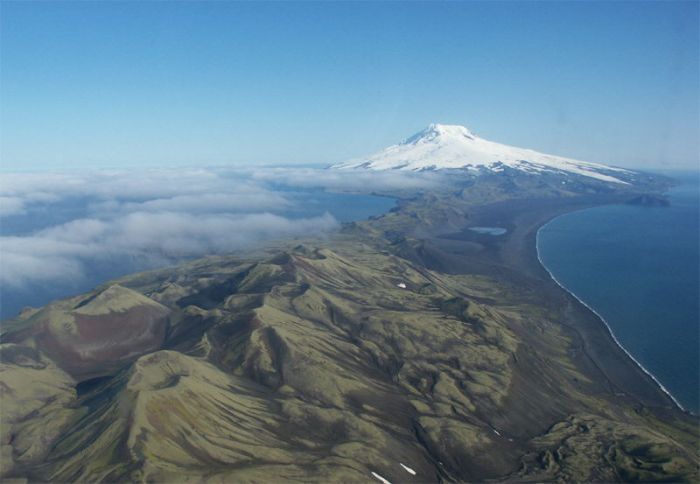 The image is showing Mid-Jan with Nord-Jan in the background. Nord-Jan is better known as the Beerenberg Volcano. Photograph courtesy of the Norwegian Weather station at Jan Mayen. Please feel free to go to their homepage for more information on Jan Mayen.

It is intriguing how differently two writers can interpret data. Both Albert and I have written about Jan Mayen, and out of basically the same available data we seem to interpret things quite differently. I expect that Albert and I are going to have quite some fun debating this article in the comment field, please feel free to chime in on the fun!

Before we start with the latest activity at Jan Mayen there is something I need to clear up a bit in reference to our latest article about the island by Albert (see reference at the end of the article). And that is about the mantleplume(s). In that article the prevailing standard model of the Icelandic plume and the maybe existing Jan Mayen plume was presented.

Standard models are good and useful, but only if they are correct. And later research has by now punctured the standard model balloon quite soundly for Iceland, and it is quite possible that new data in the future will puncture it for Jan Mayen.

In the standard model the Icelandic plume was at least partially responsible for the last stages of the breakup of Pangaea, but there is a problem with that. In later research it has been revealed that the Icelandic plume is far younger than that. Even though we do not have an exact date for when it started to form we have a span for when it started to affect volcanism in Iceland. And that span is between 21 and 14 million years ago.

Some people see a hotspot track going from Greenland through Iceland all the way to the Faroe Islands, but that is impossible since the mantleplume is to young for that, it is instead more likely that there is another process responsible for that and that it finished well before the formation of Iceland.

We also now know that the mantleplume is still developing and that it is developing from directly below the Mohorovic discontinuity and that from there it has burrowed downwards into the mantle. We also know that it has picked up momentum from its humble origin as a local upwelling. We also know that it is remarkable entrenched in its position, in 14 million years it has only travelled from the northern part of Langjökull to its current position under Kistufell. Or, more to the point, it has not moved at all, it is Langjökull area that has slowly been pushed in that direction during the last 14 million years.

As such it could not in any way have been instrumental in the breakup of Pangaea, nor could it have caused the Greenland basalt flood, or for that matter have had anything to do with the formation of the far older Jan Mayen volcanic platform. 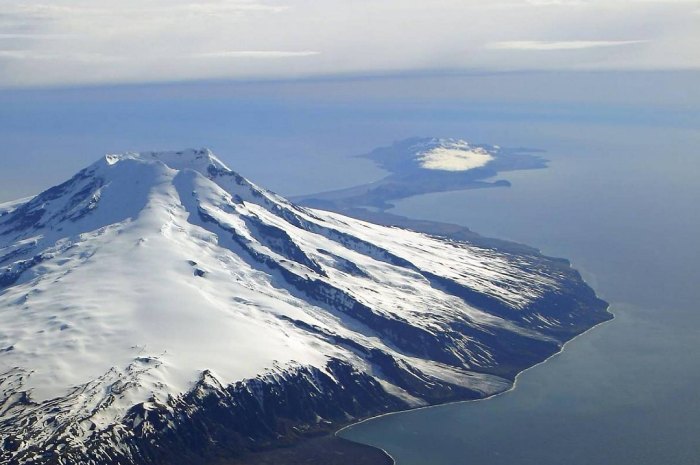 Nord-Jan (Beerenberg) with Midt-Jan and Sör-Jan in the distance. Photograph courtesy of the Norwegian Weather station at Jan Mayen. Please feel free to go to their homepage for more information on Jan Mayen.

Instead the breakup of Pangaea are to be found in spreading centers like the Alpha Ridge that formed Ellesmere Island and the slow spreading Gekkel Ridge north of Jan Mayen. Alpha Ridge funneled lava from a mantleplume of unknown origin and provenance. It is not known if that plume died out or if it is to be found lurking in the vicinity.

The Gekkel Ridge is the slowest spreading fault known on earth and at its southern end it neatly connects to Jan Mayen and the Mohns spread center, and it is as such a northern extension of the Mid Atlantic Rift (MAR).

If we return to the question if there is a mantleplume under Jan Mayen I will have to state that I do believe there is one and that it is stationary in or near the island. It would after all neatly explain that Jan Mayen is inflated above the baseline in the same manner as Iceland. But in his article Albert neatly pointed out that there is no known evidence of it existing and that is correct since nobody even bothered to look for it.

I find it a bit odd that Norway as one of the world's richest countries do not afford better monitoring, more equipment and foremost use Jan Mayen as a training center for young budding Norwegian volcanologists.

After all, it would only take one expedition to Jan Mayen to collect samples that could be tested in the same manner as in the paper I am referencing to for the part about the Icelandic Mantleplume. One expedition and a few days of laboratory work and we would know what is down below the island. But, alas no. 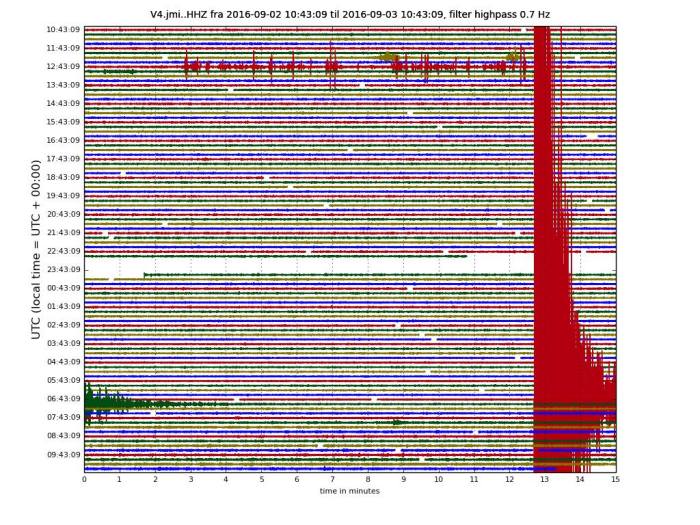 The M5.1 earthquake with what could be a small swarm occuring prior to the large earthquake. Image from Icelandic Met Office, captured by Henrik.

The volcanism at Jan Mayen is following a faultline that run straight through the island. Along this faultline two different volcanoes have formed, the older Sör-Jan Volcano and the Northern stratovolcano of Beerenberg.

There are two possible solutions for what Sör-Jan is, one is that it is a remnant of a previous stratovolcano that has gone caldera, and the other is that it is a polygenetic rift volcano. Classic literature favours the caldera solution, but from pictures and distribution of lava flows I tend to favour the idea of a polygenetic rift volcano. But, there is also the intriguing possibility that there was indeed a volcano that went caldera and then a polygenetic rift volcano formed as a special version of Somma volcanism along the spreading fault. After all, classical somma-volcanism kind of requires a ring fault and there is no such thing to be found smack bang on a spreading fault.

The Beerenberg volcano also mainly erupts according to the rift, but in a slightly offset manner with eruptions predominantly occurring in a NE/SW line to the main NNE/SSW faultline undermining the island.

This brings us to the tectonic earthquake that occurred at Jan Mayen on Saturday at 10.55 local time (3rd of September 2016). It was an M5.1 at 2 to 4 km depth 5km northeast of Beerenberg on the lineament of previous eruptions, a little while later an M4.4 occurred at the southern tip of the island at the same depth range. 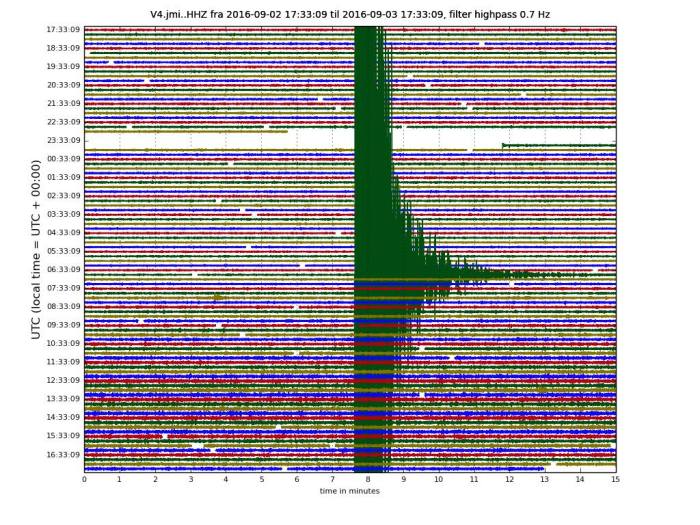 A more clear image of the eathquake. Image from Icelandic Met Office, captured by Henrik.

The problem with eruptions at Jan Mayen is that they are rarely visible to the naked eye due to low clouds and fog. So, even though there is a webcam that we can follow it will only rarely give a view of an eruption and it will only do so if the eruption is on the SW side of Beerenberg. If it happens to the NE the entire edifice of Beerenberg will be in the way unless some friendly Norwegian soldier meanders over and move the camera for our amusement.

Personally I would enjoy an eruption up there, but I bet that the military meteorological staff there will not enjoy it unless it gives them an evacuation shore leave. If an eruption would happen it would be mainly effusive and would most likely be from a flank vent rift. If we are really lucky it could produce an ephemeral island formation to the NE, but it is perhaps only me that enjoys islands plopping up through volcanism.

As I reread my own previous article on the subject and Albert's article I find it interesting how different we interpret the same sources and information where Albert favour the classic model and I favour a slightly different model. What I find most intriguing is that nobody has really done any scientific work to decide what is the correct model, well except for the part about Iceland that is actually tested and tried; hopefully we can get some young strapping PhD. student interested in schlepping out to Jan Mayen to do some good and decisive work out there.