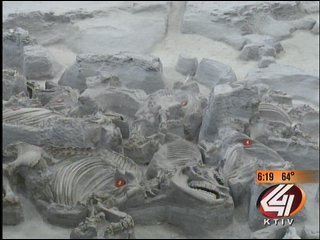 NEAR ROYAL, Neb. (KTIV) - 12-million-years-ago, elephants, camels and rhinos grazed the Great Plains but a volcanic eruption spread ash across the country.

And the widespread ashes left some of those animals preserved at the Ashfall Fossil Beds State Historical Park.

Park Superintendent, Rick Otto, talks about the park and how this event in history could happen again.

"The site is dated about 12-million-years-ago, these were animals that were killed and quickly buried during a volcanic ash storm." said Rick Otto, Park Superintendent.

"There was enough volcanic ash that over a foot of it fell on average in northern Nebraska and that fine powdery glass dust is what got into the lungs of these animals and slowly suffocated them over weeks," said Otto.

"This was an ancient waterhole, this is a depression on the landscape that had some water in it. That water then was a magnet for the animals," said Otto.

"17 different kinds of animals have been found in the fossil bed so far. There is evidence that close to 50 different species of animals were living at that time. so there are a whole number of animals that we hope to find in this fossil bed," said Otto.

Ashfall Fossil Beds State Historical Park is open from now until October 10th when it will close for the season.

For more information go to http://ashfall.unl.edu/index.html.