The Nevada County Consolidated Fire District joined with more than a dozen other organizations to announce that together they will now fly red flags on days when the National Weather Service issues a Red Flag Warning in the county.

The National Weather Service issues a Red Flag Warning on days with high temperatures, strong winds and low humidities, which can lead to an increased risk of fires.

"Our hope is that it tells the public that fires can be started much easier. Once a fire is started on a Red Flag Warning day, the suppression efforts can be a lot more challenging for those firefighters on the ground," said Capt. Nathan Menth, with the fire district.

Here's what you need to know about the county's new approach:

The county has 42 flags spread across the county

"This is not going to be an independent action warning. This is going to be a process of the National Weather Service declaration, and then we follow suit with the appropriate hours and the region," Menth said. "We might have a Red Flag Warning for the Central Valley that's displayed on the news. However, that's typically not associated with the foothills. So, to minimize people getting desensitized, we're going to be in true geographical alignment with that National Weather Service alert." 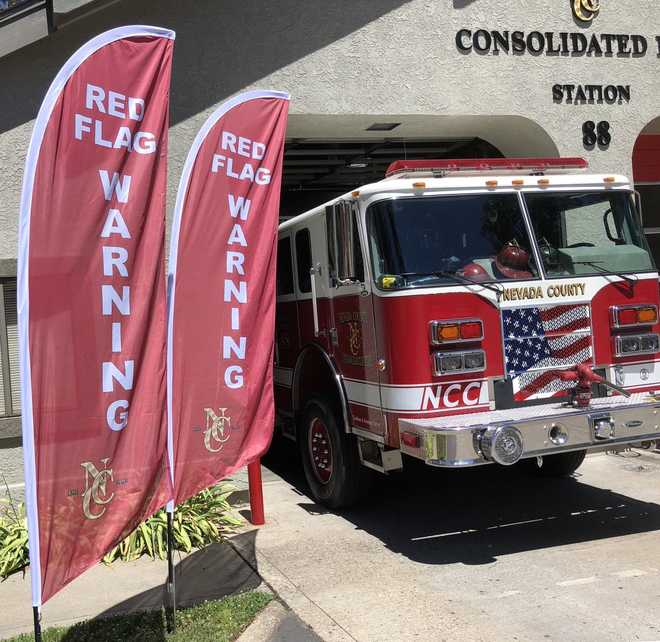 The approach in Nevada County isn't unheard of, and in fact, was long a practice of fire agencies, especially in rural areas, prior to the technology boom.

The internet, namely social media, and television have been go-to sources for weather events as they're occurring, but Menth said they'll now be able to reach those who aren't buried in their phones or who are just driving through the county.

"Going back to the basics was actually the right answer. We have thousands of vehicles a day that pass by this fire station alone. We're one of 14 that's going to be identified, and those contacts are positive contacts," he said. "Even in the world of social media today, that quantity of contacts is actually hard to reach, depending on the subject and level of interest. So, if we put a visual aid out in front of the stations of simply a Red Flag Warning and identifying a clear-cut and precise message, we hope to reach a greater populace."

What not to do when there's a red flag warning

"We'd like to urge the general public to reduce any chance of spark, whether it's yard work during the inappropriate time of day; whether it's using yard-work material that can create a spark; traveling up and down our many highways with dragging tow chains and/or improperly inflated tires on vehicles," Menth said. "An improperly inflated tire on a vehicle can pop and lead to rim and asphalt contact, and, therefore, potentially resulting in a spark. We really encourage the public to be firewise."