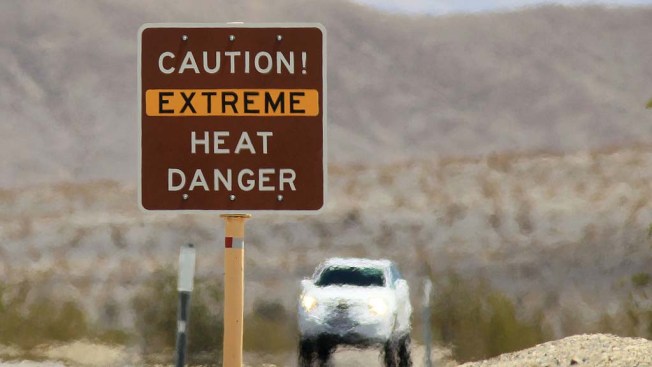 Getty Images
DEATH VALLEY NATIONAL PARK, CA JULY 14: Heat waves rise near a heat danger warning sign on the eve of the AdventurCORPS Badwater 135 ultra-marathon race on July 14, 2013 in Death Valley National Park, California. Billed as the toughest footrace in the world, the 36th annual Badwater 135 starts at Badwater Basin in Death Valley, 280 feet below sea level, where athletes begin a 135-mile non-stop run over three mountain ranges in extreme mid-summer desert heat to finish at 8,350-foot near Mount Whitney for a total cumulative vertical ascent of 13,000 feet. July 10 marked the 100-year anniversary of the all-time hottest world record temperature of 134 degrees, set in Death Valley where the average high in July is 116. A total of 96 competitors from 22 nations are attempting the run which equals about five back-to-back marathons. Previous winners have completed all 135 miles in slightly less than 24 hours. (Photo by David McNew/Getty Images)

The National Park Service says the visitor was reported to be non-responsive at 6 p.m. Tuesday and she died before emergency responders arrived at the location south of Badwater. Her name wasn't released.

The cause of death is being investigated by Inyo County authorities, but the Park Service notes Death Valley has been having temperatures above 120 degrees.

It was the second death in three days in the Mojave Desert park, where two of the most common reasons for emergency responses are single-vehicle accidents and heat illnesses.

Summer visitors are urged to drink at least one gallon (4 liters) of water per day and watch for trouble signs including dizziness, nausea and headaches.
Source: https://www.nbclosangeles.com/news/local/Death-Valley-Heat-death-stroke-tourist-summer-national-park-558866041.html
--
_._,_._,_
Groups.io Links: